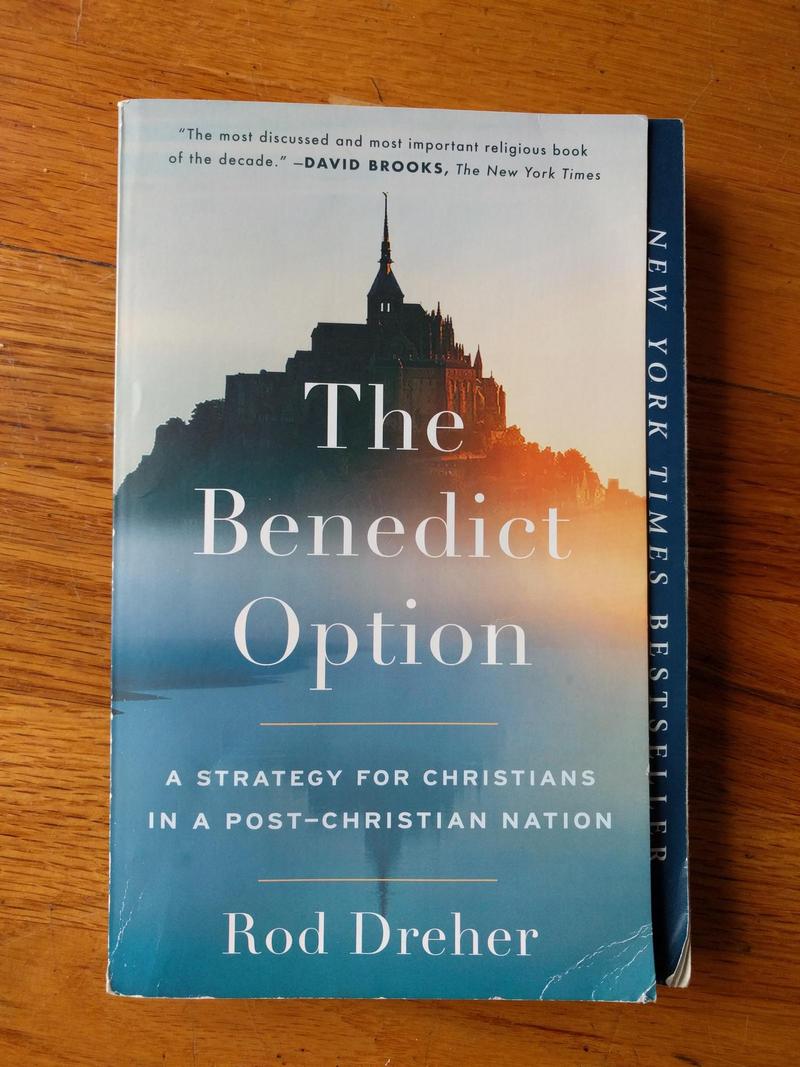 Book Review: The Benedict Option by Rod Dreher: A Strategy for Christians in a Post-Christian Nation

Published in 2017, Rod Dreher's The Benedict Option: a Strategy for Christians in a Post-Christian Nation triggered a firestorm of controversy on the Christian Right. Dreher's main message is that America is no longer a Christian nation, that we lost the culture war, as made clear by Obergefell, and that we have to make serious changes in order to survive.

Like St. Benedict of Nursia, we have to recognize that Rome is lost and focus on preserving the light so that we can be there to rebuild when the time comes. You can see why this was such a controversial book!

I first read The Benedict Option shortly after it was published several years ago during a formative time in my life, still living in our apartment in Boston with one child, before I'd discovered the traditional Mass or moved near a traditional community. It was valuable to me because it underscored many of the things my life was missing—a real home or any kind of community. Everything Dreher says seems perfectly obvious to me now, but at least in my case it was something I needed to hear.

Dreher's message is that it's not just that Christianity has been marginalized; rather, there's a deep sickness within American Christianity. Dreher argues that the de facto religion of America is not in fact Christianity, but instead what sociologists Christian Smith and Melinda Lundquist Denton called Moralistic Therapeutic Deism (MTD), which has five basic tenets:

Clearly, MTD is not Christian in any way. It's a pagan pseudo-spirituality designed for a materialist culture which elevates the self and focuses on subjective self-fulfillment. Many, perhaps most, who self-identify as Christian actually subscribe to MTD. It's the rot that's been hollowing out Christianity from the inside. Today, an MTD “Christian” is the only one whose views are socially acceptable. If you practice real, traditional Bible-based Christianity, you're seen as an intolerable bigot not fit for polite society.

MTD has gained such a foothold because Christians have largely failed to pass the faith on to their children for quite some time. You can skate by on flawed catechesis when you're the majority because cultural osmosis can make up for it. This is no longer the case, Dreher argues, so we have to start acting like a minority in order to survive. So what exactly does he recommend?

We must rediscover traditional Christianity. Fasting, daily prayer routines, and self-denial are key to rejecting mainstream materialist culture. Our disciplines must also tighten.

“Gays, lesbians, and their allies are not wrong to question why conservative Christians are quick to condemn their sins but overlook rampant divorce and sexual sins among straights in our own congregations. The early church maintained fairly strict discipline among its congregations.” [pg 116]

We have to form intentional communities with a degree of separation from mainstream culture; the idea of a “Christian Village”. For Dreher, this means structuring the home as a domestic monastery: regular prayer and Scripture reading, hierarchy and obedience, and ordering all things toward God. We have to be careful about who our kids are friends with and embrace the idea of being nonconformist and viewed as weird. We can't do this if we just live anywhere; we have to move to find groups of other traditional Christians the same way the Orthodox Jews do.

Taking great care in the education our children receive is one of the most vital responsibilities we have. It's not merely that modern education is full of Leftist indoctrination, but that the very model is wrong because it stems from a flawed anthropology. We can't simply take secular education, add a Religion class, and call it good.

“Today our education system fills students' heads with facts, with no higher aspiration than success in worldly endeavor. Since the High Middle Ages, the pursuit of knowledge for its own sake has been slowly separated from the pursuit of virtue. Today the break is clean.” [pg 148]

Rather, education should be about teaching children what a good human being should be, seeing constant examples of ideal humanity through great figures of the past who exemplify virtue. Children should be immersed in scripture and the history of western civilization to reconnect with our past and rebuild our cultural memory. Obviously you can't get this from public schools, or even most “Christian” schools. Dreher recommends classical Christian schools or homeschooling as the only two good options. If you're a two-income family, you might have to sacrifice one of those incomes for the sake of your children.

The next place Dreher turns his eye is the workplace:

“We may not (yet) be at the point where Christions are forbidden to buy and sell in general without state approval, but we are on the brink of entire areas of commercial and professional life being off-limits to believers whose consciences will not allow them to burn incense to the gods of our age.” [pg 179]

For a doctor, discussing homosexuality with a patient or refusing to participate in abortions or sex-change surgery can get you blacklisted from the profession. Refusing to make a custom cake for a gay wedding can get you shut down, leaving your life in shambles. Many companies require you to sign “diversity statements” affirming anti-Christian ideas. Dreher names several professions that are particularly vulnerable:

“Public school teachers, college professors, doctors, and lawyers will all face tremendous pressure to capitulate to this ideology as a condition of employment. So will psychologists, social workers, and all in the helping professions; and of course florists, photographers, bakers, and all businesses that are subject to public accommodation laws.” [pg 180]

Christians are going to be excluded from large segments of the economy, and we have to make peace with that. There is, after all, lots of historical precedent for religious minorities being excluded from certain professions. We should take this into account now, so that our kids don't end up several hundred thousand dollars in debt with a medical degree that they can't use without abandoning the faith.

Although some may have to accept lower-paying hard labor jobs, entrepreneurship offers a solid path forward. There are many unconventional ways that people have found to make a living, from selling homemade goods on Etsy to creating specialty clothing or other specialty businesses you can only run online. Dreher advocates for buying Christian, even when it costs more, and for hiring Christians first. If the culture is going to push us into being poor and marginalized, we can push back by supporting each other in intentional ways.

Finally, Dreher includes a discussion about protecting the home from negative influence. We have to limit the use of phones and technology, keep our kids off social media, filter the internet to fight pornography, and focus on doing things with our hands and spending family time together. This means not having phones at the dinner table, and taking on “digital fasting” as an ascetical practice.

Dreher does see a silver lining in this apparent calamity of losing the culture war:

“...by losing it's cultural respectability, the church is freer to be radically faithful.” [pg 101]

In other words, because the option of maintaining a friendly relationship with the culture is no longer available, we can be 100% authentic and uncompromising, as we always should have been. We won't be soft, because we can't be. Christianity will get smaller, but also brighter.

Many of Dreher's critics amid the backlash that followed this book's publication accused him of saying that we've lost and we ought to run for the hills. It was an unfair criticism every time, as not only does Dreher never say that, he explicitly says that we can't do that—we have to remain engaged with the culture on some level.

In The Benedict Option, Dreher is really just describing what it means to live a traditional Christian life. His central message is that we have to set our own house in order first, and be prepared to live as the minorities that we are. Many people are not willing to accept that we've lost the culture war, or that their current strategy of donating to Republicans and hoping for the best is not working. In any age, predicting hard times ahead is an unwelcome message. 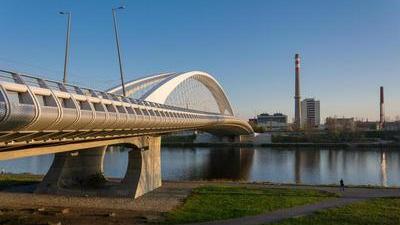 Friends have shut down conversations because they disagreed with me. But dialogue is important—for finding common ground, truth, understanding—and it's only possible if everyone in the conversation is willing to talk.
December 8, 2020 by Jacqueline
tags: politics values living well learning 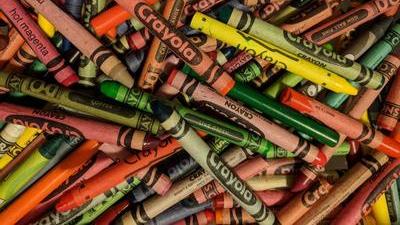 Want to get your kids out of public schools, but afraid of the costs? Here are some tips on how to afford your kids' educational journey.
December 22, 2020 by Jacqueline
tags: education children finances
Tweet!