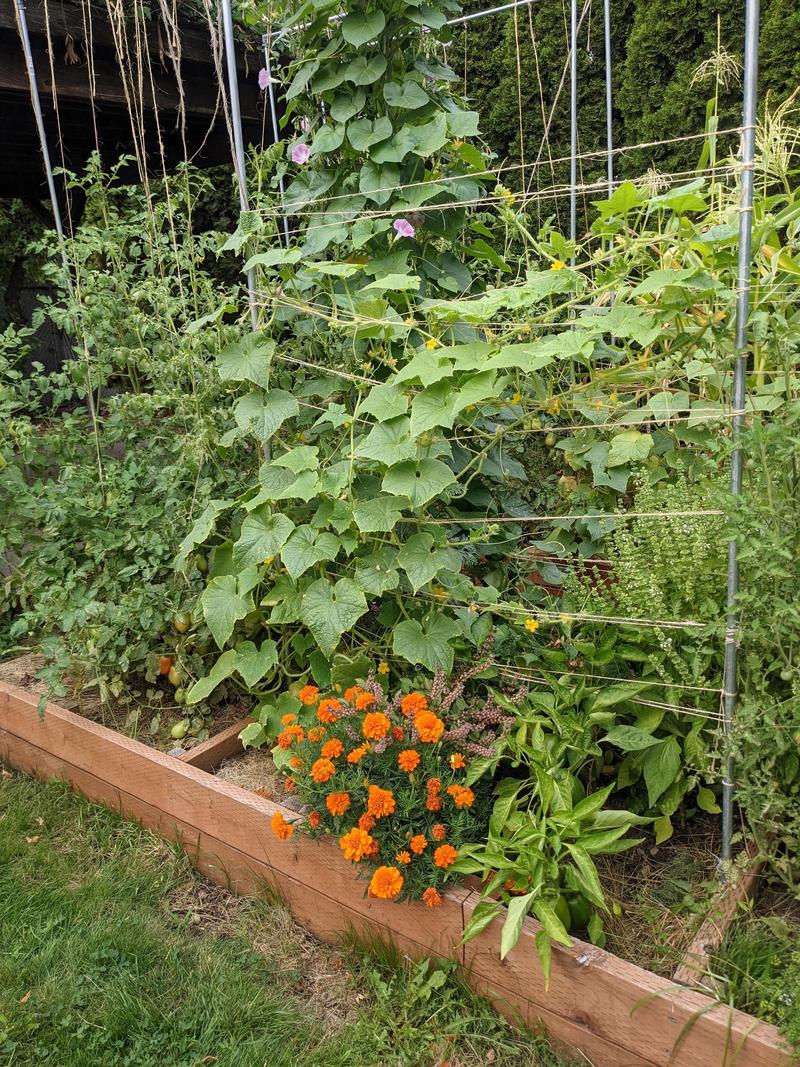 Gardening, Year 3: What I Grew and What I Learned in My 200-square-foot Backyard Garden

How this year's garden grew: A hot summer, more flowers, and not as many tomatoes
October 19, 2021 by Jacqueline

This was my third year gardening. In year 1 and year 2, I was pleasantly surprised by our large tomato harvest, and delighted at the plethora of herbs and zucchini.

The changes I made this year were (1) moved the cucumbers to a sunnier spot in the main garden beds we built, (2) try growing corn, and (3) grow more flowers. We started seeds for most of the plants in early spring and planted a few directly in the ground in May. I lost a couple squash, for instance, so I started a couple extra in the ground later.

Here are the details on our harvest, what I learned, and our plans for improvement.

Overall: How the garden grew

The verdict: the garden did not do as well this year as in the previous two years, for three reasons.

First, we had an unusually hot, dry summer. It usually gets hot and we usually have dry, clear weather, but this summer had extra of both, which was great for a few plants and less great for the rest.

Second, I spent less time gardening. With three kids instead of just two, I was a little busier… I did not weed very much; most of my weeding was done in the early weeks when the plants were young.

Third, I didn't add much fertilizer or compost. Those plants need food. We had added leaf mulch and a layer of compost in the fall last year, but none this year. I think we only fertilized once, despite having grand plans to use this fancy seaweed fertilizer a friend swears by. Ah well. Life happens.

The cucumbers grew fantastically compared to previous years. Planting them in the sunniest garden bed, in between the tomatoes, combined with a sunny, hot summer meant we had plenty to pickle! I made a couple batches of pickle relish and tried lacto-fermented pickles—more on that in a future post.

We did not get as large a tomato harvest. I suspect the weather. And maybe the lack of fertilizer. We still got plenty to eat, though; we dried some and roasted a few for canning.

This year, I found some tiny black bugs on the lower leaves, which are probably some kind of flea beetle or maybe aphid. They probably overwinter in the soil, which means I need to learn how to get rid of them. I think I saw a few last year, too, but not enough to bother doing something about. There were more this year. This could also have affected the plants' growth.

By this time of year, in October, I start forgetting how nice it was to wander into the yard and find juicy, sweet raspberries. We lost a few berries to the early heat and a few young stalks to overzealous young boys tramping through the yard. Overall, though, the raspberries were delicious.

We got some blueberries from one of our bushes; the other didn't produce anything. I'm not sure why.

The tree definitely produced more than last year, which makes me wonder whether we have a biennial producing pattern. I've read that fruit trees can often get into a two year cycle where they produce a lot one year, little the next, lots the next, and so on. This may be what's up with our plum tree. Or maybe last spring's cold weather simply did some damage to the tree blossoms. We turned nearly all the plums into jam.

Our new vegetable this year was corn! The kids loved watching the corn stalks grow taller than Dad. We had about a dozen stalks, and got a few good ears out of them. One plant produced corn with lovely purple silk.

The rhubarb plant is prolific. We made a lot of jam. Gallons of strawberry rhubarb and mixed berry rhubarb jam. It's great on pancakes.

I had fewer zucchini plants this year, since we were attempting yellow summer squash as well. The yellow squash didn't grow great; we only got a couple—which were delicious grilled, but I wouldn't have minded more.

We also planted a couple potatoes late in the season. I actually still need to dig them up and see whether we got any potatoes back.

(Read about everything we preserved, from jam to dehydrated tomatoes!)

My greens did not grow well. I had grand plans to eat kale all summer. My kale from last year had made it through the winter and produced seeds; but my new kale didn't grow very big at all. At least we didn't have much of an issue with aphids this year. The broccoli fared similarly.

The lettuce stayed small and went to seed early. I got a few leaves for salads, but not as much as I was hoping for. Same with peas.

For all these greens, I think it was too hot. They are cooler weather plants. Perhaps if I had done a better job shading them or watering the extra they may have grown better … but we were watering pretty much every day as it was.

I foraged dandelion greens and wood sorrel from around the yard for salads. I learned that alyssum is edible, and added that to my salads as well. But I didn't get many salad greens from what I had deliberately planted.

For next year, I've heard that planting green beans or peas right next to corn is awesome, because the beans/peas can climb up the corn like a trellis. One woman I know said she has two plots of corn, one interplanted with beans, one not. After a windstorm, she lost most of the beanless corn… but the other corn weathered the storm fine, likely from the extra support from the beans. Seems like a great deal.

I've heard that some people also plant squash underneath: the three sisters. It seems like a good idea for the plants, but with how squash sprawls, I wonder how you're supposed to get close enough to harvest anything? I may try it anyway.

Most of my herb and tea plants are perennials. I love that. It's so convenient that the sage, chives, thyme, oregano, lemon balm, and peppermint keep coming back, with so little work on my part. Water, prune, harvest, enjoy.

I have a patch of oregano and peppermint in the front yard, on the side of our driveway. I'm a little concerned that they may try to take over that part of the yard, given how mint family plants spread, so I'm leaning heavily on the "harvest" part of the cycle in hopes of containing them.

A few of the annuals are doing a good job reseeding themselves: In the front yard, chamomile popped back up; in the back, I have a bed full of dill, and another with plenty of new parsley. I aspire to have more plants like this. I love the idea of working with nature in creating food.

I thought I planted tarragon this year. My records say I started tarragon seeds. But, evidently, I lost it, in that I thought it was a seedling that I transplanted into the garden, but now I can't find it, so I'm guessing it didn't survive. Next year I'll try again.

I loved that we planted more flowers this year. Snapdragons, marigolds, bluebells, alyssum: The garden was full of far more color this year. It made me smile every time I saw it.

Each year, I'm trying to learn a few new gardening skills. This year, it's saving seeds.

Turns out, for most plants, saving seeds is easy. I give the kids little containers, point out where the seeds are on the plants, the kids collect them. I let the seeds dry and put them in labeled paper envelopes for next year. The tomato seeds require a little more work—let them ferment in their containers on the counter for a few days to get the gel off the pips before drying them—but even that was straightforward.

Also, sunflower! We didn't plant any sunflowers this year, but this lovely, cheerful plant popped up in our front yard.

Preparing for next year

To prepare the garden for next year, I'm mulching the garden beds with grass clippings, leaves, and leaf mold—I have a nice pile of partially decomposed leaves from last year in the corner of the yard that I'll spread out.

I would also like to add a layer of compost. The fall is still young... In previous years, we bought a square yard or two from a local landscaping supply store. Perhaps next year, I'll get around to starting my own compost pile.

Next year, I also intend to do a better job mulching the garden in the spring and using the fertilizer in the summer. We still have plenty of the fancy seaweed brand left.

We will also have our front yard to landscape! We have a new fence out front (to help keep the kids from running into the road), which means there's a strip of land along the fence available for plants. I'm thinking lots of flowers, a carpet of alyssum, perhaps peas to climb the fence. I can dream about flowers all winter.

For the winter, I have various books about small scale permaculture, homesteading, and gardening on my to-read list. I still have a lot to learn! As long as I add a new skill or two each year, and learn more about a couple plants each year—that's progress. 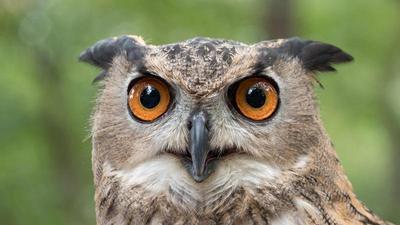 Ten Things We Learned From One Year Writing Our Blog

We've been writing a weekly blog for a year! Here's what we've learned about meeting our deadlines, writing and editing, building readership, running a blog, and appreciating life!
October 12, 2021 by Jacqueline
tags: writing learning blog reflection 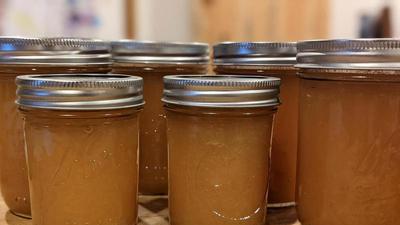 Seasonality and Natural Rhythms: Why Growing and Preserving Your Own Food Matters

Having a garden isn't just a hedge against the End Times. Whether canning jam, fermenting cabbage, or dehydrating tomatoes, here's why the natural rhythm of growing and preserving food is good for us.
October 26, 2021 by Jacqueline
tags: homesteading food garden life projects
Tweet!